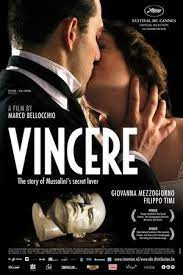 The image of Benito Mussolini has been shifted over the years toward one of a plump buffoon, the inept second fiddle to Hitler. We’ve seen the famous photo of his ignominious end, his body strung upside down. We may remember his enormous scowling visage trundled out on display in a scene from Fellini’s “Amarcord.” What we don’t envision is Mussolini as a fiery young man, able to inflame Italians with his charismatic leadership.

That’s the man who fascinates Marco Bellocchio, and his “Vincere” explains how such a man could seize a young woman with uncontrollable erotomania that would destroy her life. She was Ida Dalser (Giovanna Mezzogiorno), at first his lover, later his worst nightmare. When she first saw him before World War I, he was a firebrand, dark and handsome, and she was thunderstruck. For Ida, there was one man, and that was Benito (Filippo Timi), and it would always be so. The title means “Victory” more a woman’s hope than a reality. ROGER EBERT

Movies will then continue Feb through May on
the 1st Saturday of each month.

All this is contingent on latest COVID-19 rules.