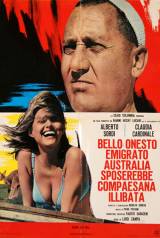 The original Italian title of this film translates as “Handsome honest emigrant in Australia would marry chaste fellow-countrywoman,” directed by Luigi Zampa, with stars Alberto Sordi and Claudia Cardinale.
Amedeo is a poor Italian immigrant living in Australia for twenty years. Seeking to marry an Italian wife, he corresponds with Carmela, a pretty girl from Rome. They do not reveal their true identities and do not mention their hardships in their letters. Carmela is actually a prostitute seeking an opportunity to change her life style. Amedeo, embarrassed about his looks, sends a photograph to Carmela of his handsome friend Giuseppe.

THE SUMMER FILM FESTIVAL SCHEDULE WILL BE PUBLISHED AS SOON AS THE LITTLE ITALY NEIGHBORHOOD OPENS AND PUBLIC EVENTS ARE ALLOWED. MEANWHILE, STAY SAFE.
Go to Header Section